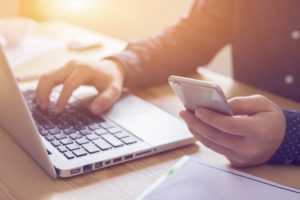 In our globalized economy with people who travel, work and recreate in diverse areas, a widespread, digital identity system has become an internationally shared goal. A number of firms are focused on Blockchain technology as enablers for parties independent of each other to rely on the same, shared, secure, and auditable source of information.

Blockchain technology can ensure the current data state of an entity is a valid representation of the entity, distributed across a network of applications, including an immutable record of data provenance . It is believed the application of Blockchain technology might eliminate a party using a fake mailing address, security number, or phone number – all protecting parties from identity theft, and ensuring that a person is who he says he is.

Digital identity is becoming a crucial need; and Blockchain is one technology that might revolutionize the way we exchange information.

The Advent of Blockchain
Electronic payment transactions across the Internet rely on financial institutions which serve as trusted third parties who mediate disputes. The cost of mediation and other support items can drive transaction costs up; and there aren’t any completely non-reversible transactions. In the electronic payment world, fraud is considered unavoidable. Thus, the central intermediaries strive to minimize fraud; but an acceptable level of fraud is a cost of doing business – a cost the consumer ultimately pays.

He started with the concept of Distributed Ledger Technology (DLT) with its peer-to-peer distributed network and digital signatures (the latter provides strong proof of ownership); but he added a timestamp to generate computational proof of the chronological transaction order. This timestamping of the DLT solution was to combat the “double-spending problem” that could exist purposely or accidentally. The timestamping of transactions occurs by hashing them onto an ongoing chain of proof of work, forming a record that cannot be changed without redoing the proof of work. Further, the longest chain serves as a proof of the sequence of events, as well as proof that it came from the largest pool of Central Processing Unit (CPU) power. The more nodes over which a Blockchain is distributed, the stronger and more trusted it becomes.

The first implementation of Blockchain technology was Bitcoin, a crypto-currency. The virtual ubiquity of the Internet-enabled Bitcoin operates without a central validator, but with transparency. And if the nodes and miners (those who use the nodes) are sufficiently decentralized and properly incentivized, then the transparency leads to a high level of resiliency, as it becomes infeasible to shut down the network, or to make unauthorized changes to the Blockchain. In spite of the transaction transparency, the ownership of the Bitcoin is pseudo-anonymous. This characteristic gave rise to false charges that Bitcoin was somehow sinister and was used primarily by narcotics dealers.

Blockchain is innovative and exciting. While interesting, the Bitcoin application may not be the real innovation; but rather it is the trust machine behind it that could offer the real promise of positive change in the way that businesses and people co-operate.

Blockchain Advantages and Disadvantages
Although designed originally to support a crypto-currency, Blockchain is effectively a subset of DLT, and data can be stored in the transactions’ metadata . A Blockchain-based distributed ledger is now known as Blockchain 2.0, and it can include new technologies such as smart properties and smart contracts.

Blockchain has multiple advantages over traditional solutions which can be used to solve an array of issues. While no panacea, Blockchain does offer attributes that can successfully meet a number of use cases. Blockchain primarily offers six key advantages over traditional distributed systems: (1) decentralized management, (2) immutable audit trail, (3) data provenance, (4) robustness / availability, (5) security / privacy and (6) computational logic.

The disadvantages of Blockchain also require consideration; they include:

Lack of Confidentiality. Since everyone can see every transaction, it has excellent transparency but poor confidentiality. Of course, a user could be partially anonymized by using hash values as addresses; but the user can still be identified through inspection of publicly-available transaction information on the Blockchain.

Slow Speed and Scalability. The transaction time of a Blockchain can be attenuated, depending on the protocol used; and this speed constraint may retard the scalability of Blockchain applications. For example, Visa/MasterCard transactions are processed at a rate of about 4,000 per second, compared to Bitcoin’s rate of seven transactions per second.

Moderate Integration. Generally, DLT doesn’t integrate simply and directly into existing platforms and systems. Ledgers are valuable commodities, and distributing them via an emerging technology is not a trivial consideration.

Governance Issues. The reason many countries have shied away from Blockchain and its cryptocurrencies is due to the lack of rules governing Peer to Peer (P2P) global payments based on DLT. e.g., what is the recourse for money sent in error?

Identity Ecosystem
Identity is central to the future of the online world. For the past two decades, online experiences have played significant roles in our daily conduct and for the past decade, our respective mobile devices have increased their central roles in, if not control of, our lives.

Most technologies occur within an evolving industry ecosystem. This is true of digital identity as well as Blockchain. The ecosystem creates forces which drive development and innovation. Identity’s ecosystem includes vertical industry institutions, technology providers, and regulators. Interestingly, the early adopter industries for Blockchain such as financial services, utilities, healthcare and telecommunications are highly regulated. Technology providers have worked hard to gain acceptance in these regulated industries, and acceptance of Blockchain technology will probably require irrefutable evidence of its usefulness.

To prepare Blockchain to be a major component in identity management and for widespread adoption, there will need to be far greater collaboration between the business sector and public sector. The lack of regulation is why early crypto-currency adopters loved Blockchain. But for mass acceptance and viability, established processes and regulations are now vital to protect the public. We will need enforceable rules and basic protections.

Some ask if identity management will soon encompass Blockchain technology? But that may not be the right question. It will depend on those use cases where Blockchain is uniquely qualified to make a major contribution. Like any technology, there is going to be a range of needed services where it can contribute, and other areas where it cannot.

It is apparent ID/password credentials do not work well. An alternative is having a unique, government-sponsored digital identity; but that, too, has its pros and cons. For example, in Estonia, Kazakhstan, and India, citizens have a unique digital identity that can be used to register property, file taxes, vote, or withdraw money from an ATM. Their identities are carried on a chip-based card. The digital IDs are managed by the central government authorities. Thus, they have a single point-of-failure and a single point that hackers can attack. Therefore, this solution is not without risk. And what happens when that chip-based card with all its individual identity information is lost or stolen? How does an individual prove his or her single, digital identity when breeder documents are no longer maintained?

Blockchain Adoption
The most complex issue with Blockchain focuses on its social aspects – how to wean people from their rooted notion of physical (ID cards, passports, etc.) and knowledge (passwords, PINs, etc.) tokens, and move them to the digital realm.

Some have referred to Blockchain as a ‘disruptive’ technology ; but others see Blockchain and its precursor, DLT, as enabling foundation technologies. It has the potential to create new economic and social systems. However, it may take a decade or two for the gradual but steady adoption of the technology. The span of technology adoptions occurs in relation to the needs of the market but interestingly, the most pervasive technology shifts tend to take a significant amount of time to reach the critical mass.

While it may take decades to complete the transformation, there are Blockchain opportunities now. Organizations should ensure their employees learn about Blockchain, potentially develop company-specific applications, and systemically invest in Blockchain infrastructure. That said, readers should know the barriers to adoption remain daunting, and the sheer complexity of the adoption process might invite a pause. Start small, but proceed with steady steps.

As with any emerging technology, there will be a range of successes and failures as use cases are proven. Blockchain will undoubtedly take some identity roles over the next five to ten years. However, the degree to which Blockchain will be successful in the identity space will depend heavily on how well the industry can resolve its regulatory issues.