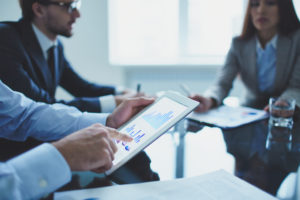 The pair attended multiple presentations, speaking engagements and roundtables over the course of the multi-day event and left with three primary takeaways regarding the state of data management within the government sector.

Because we are living in the age of data, government and businesses alike are inundated with large volumes of data every day. Success depends on capturing, analyzing and ultimately transforming data into information and intelligence to improve national security.

During the conference, Timothy Groh with the FBI Terrorist Screening Center provided an update on the threats facing the United States as well as the FBI agencies’ efforts to assess and counter those threats. He spoke about the number of ongoing domestic terror investigations including anticipated attempts by foreign countries and other state actors to influence the 2018 midterm elections.

Physical security systems consisting of video surveillance, access control and alarms, when integrated together, can provide great solutions for security.  Department of Homeland Security (DHS) has additionally moved into the age of biometric technology and the applications are fast moving throughout the federal government, including the Transportation Security Administration (TSA).

Patricia Cogswell, Deputy Administrator of the TSA, discussed policies concerning a range of issues. Among them were drug trafficking at the southern border of the United States and ports of entry. She also stated that the TSA is collaborating with several major airports and airlines to install biometric terminals that will use facial recognition to automate many processes in the travel experience, from self-service bag drop to ID verification in order to board a flight.

Cogswell said that by testing biometrics technology in the airport environment, the TSA hopes to increase security effectiveness and stay ahead of any threats. The TSA will continue to leverage their partnerships to deliver enhanced capabilities to checkpoint lanes throughout the country.

As technology continues to advance, the TSA hopes to reduce the need for physical forms of identification by developing systems that use facial biometrics and fingerprints to verify a passenger’s identity. In the past, surveillance footage was often overwritten and cost limitations prevented data from being stored for long periods. According to Cogswell, today’s technology along with the cloud is on hand to help ease the data storage headache, allowing the TSA to hold onto vast amounts of data for a longer period and, at the same time, become more proactive and predictive in nature.

Several presentations relating to cyber security advocated private companies and government agencies should focus their efforts on the same goals.  Throughout the conference, there was growing support for the contention that supply chain venders bear the costs imposed by insecure devices. However, The Honorable David Glawe, Under Secretary for Intelligence and Analysis – DHS, also acknowledged that “It can be quite challenging to assign responsibility in the context of systems comprised of devices and software from numerous vendors and assets.” The DHS has modernized its biometric identity management system supporting border and law enforcement functions to a person-centric model, which began May of 2018. Many of the DHS personnel including military or former military, intelligence, emergency management, public safety, and homeland security leaders have unparalleled experience safeguarding the United States.

In previous years, government and business identity management involved credentials and biographic data which categorizes name, address, date and place of birth. Today’s increasingly globalized and digital world is demanding that biometrics, coupled with biographic data, become the identity management standard. As a practical matter, reducing all possible ways an individual can be identified to a simple set of characteristics that, as unequivocally as possible, identify an individual as unique. There is a wide range of issues and threats, including ISIS and al Qaeda, cybersecurity, information sharing between federal agencies, and violent extremist groups within the USA border. The question is how to accomplish this task and whether or not government and private companies can work together to reach goals to improve biometric identity.

There was a real concern about the rise of domestic and foreign acts of terrorism and the increase of global instability. More than one speaker touched on the fact that the United States should focus and set priorities to enhance and secure the country from the evolving current and future threats. It was pointed out that cybersecurity should be addressed by an alliance between private, public and government agencies to focus their efforts toward a common goal of protecting our country. It is currently estimated that the private sector’s capacity for such work is 50x that of the public sector. To address these ongoing challenges, there are multiple possibilities including modeling mechanisms that would incentivize technology firms to prioritize security when developing products or services, and analyzing the applicability of existing laws in holding firms responsible for security breaches.

The information received before and during the conference pointed out that emerging technology such as predictive and behavioral analytics, artificial intelligence and machine learning, blockchain, and physical and logical access control technologies are used in many instances to maintain resiliency.

Also, the ability to recover from or adjust easily to border operations, preventing cyber-attacks and changing needs to use more private/public partnerships and the cooperation between each state, local and federal agencies must be in place to share information between them if the United States will continue to be successful against domestic and foreign acts of terrorism. Several speakers including Timothy Groh of the Federal Bureau of Investigation (FBI) and Monte Hawkins of USA Customs/Border Protection stressed the concern about agencies sharing information which is often not the case.

However, throughout the year, the DHS team has been accelerating progress, conducting hundreds of agency exchange meetings to establish a collaborative, public-facing website to support this cross-government effort and further advance federal website initiatives and data integrity.

David Glawe, Under Secretary for Intelligence and Analysis, said the DHS still has work to do to ensure a successful and enduring implementation of these critical security enhancements. “Encouraged by progress but always with an eye towards an unflinching adversary, we will not relent in our mission of safeguarding information systems for the Federal IT Enterprise and, most importantly, the American people”.

In response to communications challenges faced during the attacks on September 11, 2001 and Hurricane Katrina, the DHS Office of Emergency Communications (OEC) supports and promotes communications used by emergency responders and government officials to keep America safe, secure, and resilient. The DHS OEC collaborates with the public and private sectors to ensure the national security and emergency preparedness communications community has access to priority telecommunications and restoration services to communicate under all circumstances.

RFID capabilities were also a major topic of discussion as Customs & Border Patrol screens over 75,000 shipping containers a day that arrive at various ports of entry throughout the United States. With RFID technology, blockchain, and big data, these capabilities allow the government to quickly triage containers flagged for invasive searches.

In closing, beyond the real-time functionality of security systems, a constant flow of data emanating from video surveillance, access control, alarm technologies, implementation of critical security enhancements, biometric identity, artificial intelligence and machine learning, can be analyzed and transformed into metrics that can provide immediate insights into terrorism related crimes and suspicious criminal activity operations.  Artificial intelligence is among the new tools to help the DHS/TSA make sense of the increasing flood of data and boost its impact beyond border security and throughout DHS’s agency.

With the constant flood of cyber security breaches that we hear about as consumers where hackers have stolen data, it seems we can no longer even get a cheap hamburger without hearing that once again, the information we want to be kept secret, has been breached.

The old phrase of “you can lead a horse to water but you cannot make him drink” rings true as we approach digital and personal privacy. We learned that the number of data breaches in the U.S. hit a record high in 2017 and is moving higher in 2018 as we end the year.

At the end of the day, data is a valuable asset, and a business’s or government’s success often rests on how well it manages that asset.