How 5G could neutralize Net Neutrality 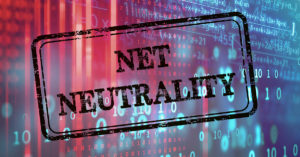 Just over a year ago, the US Congress repealed the FCC’s Net Neutrality ruling – a ruling that made it illegal for mobile and internet providers to charge more for access to certain sites or platform. While Congress is gearing up for another fight, this time to reinstate Net Neutrality, one expert says it may no longer be needed.

Kristina: US House Democrats are trying to return net neutrality – giving the FCC power to police how broadband providers grant access to consumers. What are your thoughts on this?

Rolando Hernandez, VP, Valid: Some say that the government needs to police how broadband providers grant internet access to level the playing field and prevent startups from being pushed out. Others say that regulation will hinder future internet innovations. All politics aside, the rise of 5G makes the argument over net neutrality moot because the technology eliminates unfair advantages for providers, while still allowing them to push the boundaries of technology. The FCC should focus its efforts on its “5G Fast Plan” to speed up widespread adoption of the network.

Kristina: It has been nearly 18 months since Net Neutrality was repealed – what changes have you seen in the digital space since the repeal?

Rolando: It’s impossible to count the number of digital innovations that have emerged in the last year and a half, but the major breakthroughs affecting net neutrality are IoT solutions and 5G technology.

IoT and 5G will transform how we connect to the internet and with each other. We’re seeing a lot of connected devices being used in healthcare, retail, manufacturing, automotive and food and beverage. Through these devices, businesses are able to better engage with their customers through mobile apps. For example, consumers can now access readouts of their car dashboard from their phone, detailing mileage, gas and maintenance information. These innovations are an opportunity for businesses to create stronger relations with their customers and improve the quality of their service. However, these new solutions are dependent on a strong internet connection. With 5G technology, more people have access to high-speed internet and can reap the benefits from the various IoT devices offered on the market.

With the repeal of net neutrality, service providers now have the power to decide who goes through their infrastructure and determines the price to do so, allowing them to block user access to some services and third parties from transiting through their networks. Small companies or startups interested in providing IoT services could be directly affected by those large providers controlling communication to end users.

Kristina: What is the connection between 5G and net neutrality?

Rolando: The end goal of net neutrality is to create an equal opportunity to access all content on the internet. As 5G becomes widespread, not only will everyone in the country have access to high-speed internet, but there will also be enough speed and bandwidth to accommodate all content providers. This prevents broadband providers from being able to control how long it takes for certain sites to load, restoring the freedom of internet usage.

Kristina: The FCC has announced a “5G Fast Plan” that would speed up the delivery of 5G services across the US – why is this move important?

Rolando: The U.S. has been slow to adopt 5G technology compared to other parts of the world, mostly out of concerns over the security of the network. A few of the major internet providers have just started rolling out their first 5G products or have plans to later this year. As of now, this technology is targeted to consumer consumption, but many enterprises are eager to leverage 5G to speed up their digital processes.

But business leaders aren’t the only ones that see value in investing in 5G. Through the recently announced “5G Fast Plan” the FCC plans to speed up the expansion of 5G access across the U.S. As part of the initiative, the agency will work to free up spectrum, make it easier for local governments to set up wireless infrastructure, and encourage the deployment of optical fiber. The FCC is also allocating a fund to expand high-speed internet access in rural areas and provide connectivity with 5G wireless.

Kristina: How important is 5G for businesses and consumers in the US?

Rolando: Not only is this move important for the U.S. to keep up with its global competitors in 5G services, but it also has the potential to deliver economic growth. According to the American Consumer Institute, 5G networks are projected to bring $533 billion in U.S. GDP and an additional $1.2 trillion in consumer benefits. By making 5G widespread, it allows businesses and consumers in all communities to have equal access to the internet. This is more important now than ever as digital solutions have taken over the enterprise and daily life. Hospitals use connected devices to provide better healthcare, smart cities use them to make neighborhoods safer and cleaner, and manufacturers use them to deliver products faster. From businesses to governments to the average citizen, an accessible 5G network has the ability to connect the entire country.

You may also read the article by visiting BizReport.