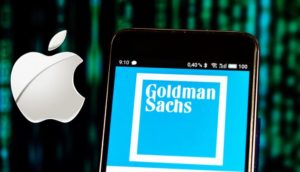 Apple is ready to get even closer to your wallet, and it has a recognizable partner to help win a permanent spot.

Joining forces with a finance giant like Goldman Sachs is part of Apple’s latest effort to revolutionize an established industry — but the partnership is mutually beneficial. Goldman Sachs is a new player to the consumer-facing banking game and needs the brand power of Apple to build the technology piece that will set it apart on the market. On the reverse, Apple needs an established financial player (Goldman Sachs has a market capitalization over $88 billion) to back its entrance to the payments game.

Of course, this is hardly the first time two corporate behemoths have entered into a mutually rewarding relationship to upend an industry. Just last year, Amazon, JP Morgan Chase and Berkshire Hathaway announced a nonprofit aimed at revolutionizing healthcare for their 1.2 million collective employees — a move that could radically change the way large corporate entities provide healthcare of their own.

It’s clear that big companies are increasingly comfortable partnering to deliver innovative solutions, as opposed to venturing into unfamiliar territory on their own. In the case of Apple and Goldman Sachs, this could mean a colossal shift in the way consumers experience payments, challenging the status-quo of traditional financial service corporations.

Promises of the partnership

Apple’s rethinking the bank account just like they rethought the phone. The company already offers customers a chance to pay with their Apple products — a tap of the iPhone has accomplished this since Apple Pay debuted in 2014. However, until now, those transactions have always been tied to a traditional debit or credit card. With the recent introduction of Apple Card, it seems the company is getting just what it sought out of a partnership with a finance powerhouse: the backing to develop financial features at an account level.

The company has rarely faltered when it comes to providing its own take on a long existing piece of technology (look no further than the iPhone), and consumers are getting a similar level of innovation with Apple Card. The major selling points immediately touted on the website include an absence of any fees (be that annual or late payment), instantly accessible cash back and enhanced financial tracking and budgeting capabilities. But part of what Apple believes “completely rethinks everything about the credit card” is that the card itself lives within the Wallet application and is available there instantly upon approval. The physical (laser-etched, titanium) card arrives in the mail at a later date and is reserved only for those occasions when Apple Pay is not accepted.

Security is another selling point. Apple boasts that its Face and Touch ID security systems are some of the most advanced security technologies in the industry and that the lack of a permanent card number serves as an added protection. But with recent data breaches still fresh in consumers’ minds, Apple also promises to never share or sell consumer data to third parties for marketing or advertising purposes. However, Goldman Sachs will have access to data in order to operate Apple Card.

A reputation boost and an opportunity for the future

It’s safe to say that Goldman Sachs has had its fair share of negative headlines and attention. However, this partnership could signal the beginning of the company regaining consumers’ trust. If Apple Card successfully offers better, more flexible financial services to a wide range of consumers, it will be on the back of Goldman Sachs’ undeniably large resources.

The venture between Apple and Goldman Sachs has the potential to shift how consumers think about payments, but Apple Card’s success would also legitimize future tech partnerships. In the past, companies developed everything in-house, including technology. However the success of this particular partnership would likely inspire more legacy players to partner with companies that have the technological prowess to help them innovate.

Ultimately, Apple Card is just a digitally-driven credit card. And while its promises of low interest rates, competitive cash back perks and ramped up security efforts make it a healthy competitor to other cards on the market, it’s the brand power that really gives it the potential to disrupt. The Apple name will likely encourage customers to at the very least give Apple Card a try — and if the technology follows the trajectory of its other Apple brethren, it has the potential to take off and become a preferred option.

The article can also be read by visiting Banking Exchange.